In the previous post I talked about the theory behind the pattern. This post is about its implementation.

If you read my blog you know how much I like “Program to an interface and not to an implementation”; this mean that first of all you will see interfaces instead of classes.
One of the targets of this implementation is maintain the same style of the others “Session Easier” of uNhAddIns; this mean: 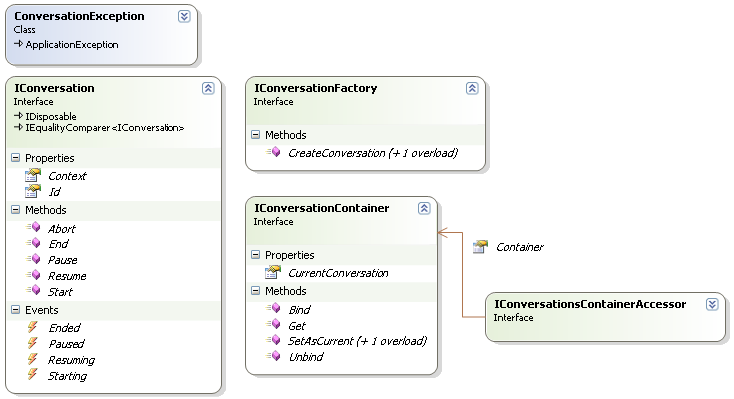 Is a representation of a “Persistence conversation” I showed in the previous post. In addition there are some events.

Is the base exception for “all” conversation implementations.

So far I “don’t know” which will be the real implementation of the “Persistence conversation” (may be ADO.NET, may be NHibernate); its factory is needed. 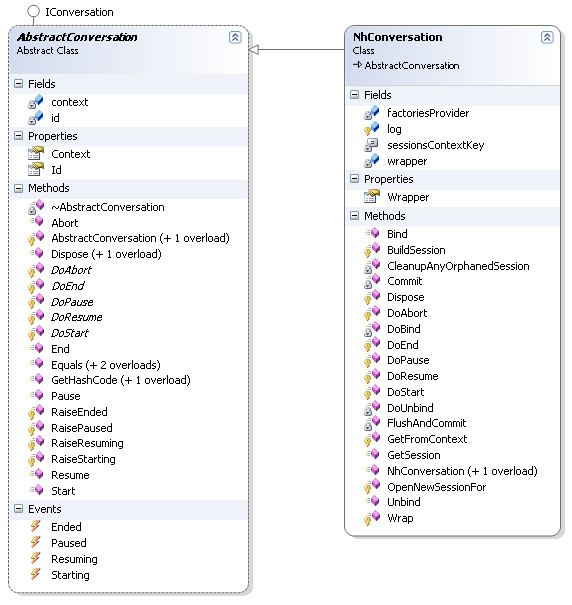 Encapsulation of the behavior of a generic Persistence conversation. The implementation, basically, define that each conversation have an ID defined at the moment of its creation, implements the EqualityComparer based on the ID, implements the Disposable pattern and implements the events managements. The real hard work will be done in the five abstract methods: DoStart, DoPause, DoResume, DoEnd, DoAbort. 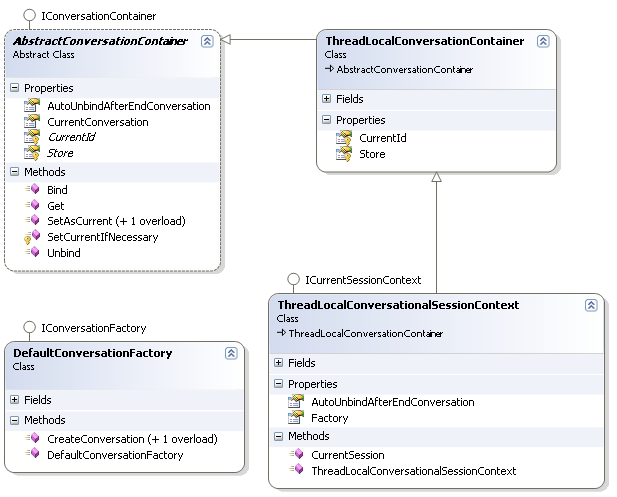 Nothing special to say, its implementation is trivial.

This is the implementation of the ConversationContainer for a winForm, or WPF, application. As you can see the CurrentId and the Store are two ThreadStatic fields.

The next step, perhaps before a working example, will be “Aspect Conversation-per-BusinessTransaction” to have the “Full cream” working together. If you are inpatient you can see it by your self.

In this post I will intent to describe a “new” pattern for NHibernate session management.

This pattern born some years ago, with another name “session-per-UseCase”, when I looking for a pattern to manage nh-sessions in Win-Form applications. The first implementation was not so clear and, before make it public, I have continued looking for some, well described, existing pattern. Two or three moths ago I was involved in another WinForm application, using NHibernate as persistence-layer, and I have re-begun the search for a pattern for session-handling in a rich-client application. This time my exigencies was something different because what I really want is a pattern to manage the session in complex applications even in web. By “complex-application” I mean an application where business-transactions involving more than one request is the norm and not the exception (for example a ERP of a big company). Using our best friend, Google, I find some few words about a pattern, used in JAVA, named “session-per-application-transaction” but his implementation is not so clear and is wired to some JAVA-world feature… unusable for me.

When you read something about NHibernate-session-management is because we want abstract/”aspect” NH-session’s stuff from the code are using it. In general, or I hope so, you are using the session in something like a DAO/Repository and, in a use-case, you are calling more than one DAO/Repository. Open a new session in each DAO/Repository is an anti-pattern called session-per-call (or very closer to it). What we are searching is something to manage the session in an high-layer but without wire that layer with NHibernate. In a WEB environment it is pretty easy because we can manage the session using an implementation of a IHttpModule, or in the HttpApplication, “intercepting” the request (two patterns mentioned here). In a winForm, or WPF, aplication it is not so clear where the abstraction have place. In this post I will use an “artifact” named Model to represent the “abstraction-point” (in my mind the Model is the business-object that are using DAOs/Repository and domain-entities); in an MVC based application, probably, the abstraction have place in the Controller.

Perhaps you have idea about what is a “business-transaction” in your application but, what mean “conversation” ?

To describe the conversation I have imagined a chat between two persons. A chat may Start, Pause, Resume, and End. By “End” I mean: the end with some formal conclusion. Not all chats are terminated with “some formal conclusion” so, an event like Abort is needed. Resuming, in a conversation we may use five actions: Start, Pause, Resume, End, Abort. When I’m working in my PC, in general, I have more than one started chat, with more than one person. In my IM client, each chat is identified by an open form. In each chat I’m chatting about one specific matter, that mean that each chat have a specific context.

Can I apply the same concept to a persistence-conversation ? 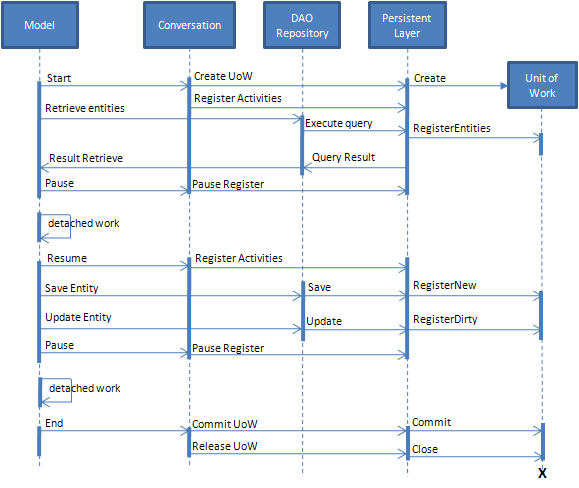 The Conversation with NHibernate

In NHibernate we have a well know and well described pattern named long-session (aka session-per-conversation). The description of the pattern is available in NHiA. For brevity here is the picture (extracted from Hibernate site)

To better understand let me explain what happen in Conversation-per-Business-Transaction:

These are the base concepts behind the pattern.

If you want see one implementation of the pattern, even using Castle.Windsor to solve AOP, you can download uNhAddIns. I hope to have the time to write something more about the actual implementation soon. 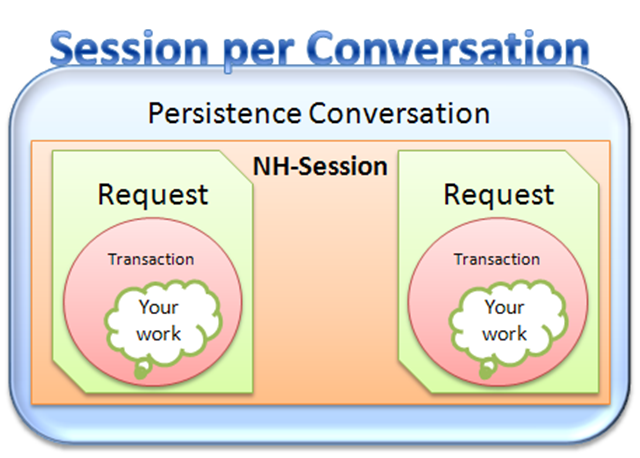 Tags: Español
Email ThisBlogThis!Share to TwitterShare to FacebookShare to Pinterest

A week ago I started a new project in uNhAddIns; the code-name is Artorius.

The base target of Artorius is the HQL-AST (perhaps is better to think about it as nHQL-AST). 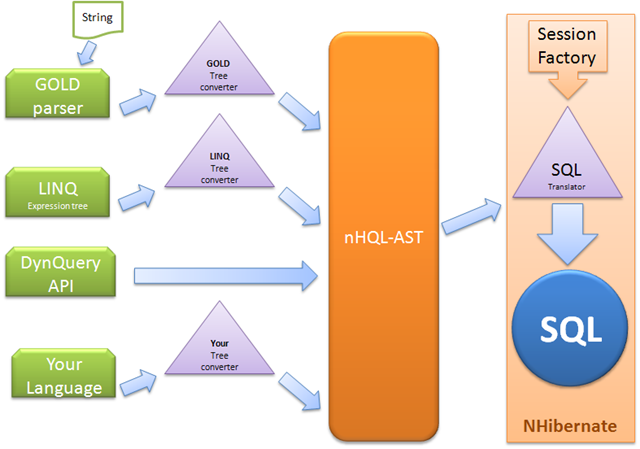 The port of the string-AST-parser is an old task in NHibernate (perhaps one of my first occupation). Hibernate are using an old version of ANTLR Parser Generator and more than one year ago Ayende and I had tried the port of that code, in two different ways, but without a usable result. After that work I found GOLD and Diego Jancic (aka “The economist”) had begin a work to implement an string-AST-parser based on GOLD; unfortunately the work on OSS is hard to maintain and perhaps the state of NHibernate code-base, at that moment, was not ready to receive the new parser.

In uNhAddIns , after a request of my friend and after implement DetachedQuery, in a weekend born something like a game, named: DetachedDynQuery

The first time I think about Artorius was as an evolution of DetachedDynQuery; a real AST representation of an HQL query. I must admit that was a loooong thinking, without touch my keyboard, for various reason (the first is that now we have LINQ).

To have a better idea about what nHQL-AST must support, I have begun the work from the string-AST-parser based on GOLD. The actual parser are passing the test available here (basically to test the grammar).

Browsing the code you can see that there are some other incomplete work but before start the real implementation of the nHQL-AST I prefer to complete the grammar. If you want navigate the BNF, of the actual grammar, you can download the HQL.htm file from here.

Yesterday I saw the light at the end of the tunnel.

Do you want avoid XML to map your domain ? Which language you want use to configure NH ? Why not English or Spanish or Italian ?

NHibernate have a lot of fireflies… the EntityMode.Xml are allowing something like this but using XML mappings.

The same base concept was provided by AjGenesis some years ago, but even if today AjGenesis are supporting text, instead XML, the MGrammar appear as a very powerful tool to create our DSL to generate all artifacts, including NHibernate mappings of course (I know… I know… AjGenesis is a project of “good soul”, behind MGrammar there is Microsoft).